Currently resides in Fort Worth, Texas but he is a native of Uganda. He attended Dallas Baptist University where he earned a doctorate in Higher Education Leadership. He also attended the University of Dallas, where he earned a Master of Business Administration and a Master in Finance. He is a successful entrepreneur and he currently teaches Corporate Finance at Dallas Baptist University in Texas; he has also previously taught at Makerere University in Kampala, Uganda, and at Northwood University in Cedar Hill, Texas. He is proudly married to Eva and their marriage is blessed one girl and three boys, and as a family, they attend First Baptist Dallas Church. Dr. Sonko is the founder and visionary behind EATBETA.

With a good job and an established family in the United States, Dr. Sonko would have no reason to think about Africa; but he is reminded that he was raised and grew up in Africa and he knows, first hand, the challenges facing most Africans who live in sub-Saharan Africa. He believes that empowering smallholder farmers, with skills in business acumen and modern agriculture, would eventually help to transform rural livelihoods. He is now determined to use the skills and experience he has acquired through education and work, while living in the United States for almost two decades, to contribute to Africa’s transformation from the nagging problem of poverty.

Is the Technology Director at McKinney Christian Academy in McKinney, Texas, where he also teaches Business Information Technology, and coordinates the school’s website. Prior to becoming the Technology Director, Mr. Erger spent two years as a District Mathematics Coach. He helped Math teachers with their instruction and data analysis. Prior to his Mathematics coaching duties, he was an Assistant Principal in both elementary and secondary environments. Mr. Erger has also been involved in high school football, cross country and basketball coaching.

He has a degree in Civil Engineering and a Master of Education degree in Secondary and Higher curriculum with a minor in Physics. He recently completed 19 graduate mathematics hours to be able to teach as an adjunct professor at the collegiate level. He is also a financial advisor for a brokerage firm. Mr. Erger believes that the Lord has gifted him uniquely to help with EATBETA’s vision and his prayer is that the Lord will allow him to have a positive impact on the people of Uganda.

Is married to Martha and they are the proud parents of 4 boys, Paul 22, Michael 18, Johnathan 14 and Nathan 13. David grew up in a Denver but spent his summers on a farm in Kansas that has been in his family since the 1860s. He graduated from Colorado State University and Texas Tech School of Medicine. He was specially trained at East Carolina University and the University of Maryland, Shock Trauma. He is Board Certified in Emergency Medicine. He has practiced for the last 20 years with Martha at his side in Kansas City and now in Boise, Idaho. David enjoys outdoor activities and time with his family; and they attend The Pursuit Church in Boise, Idaho.

Is an entrepreneur and he lives in Sachse, Texas. He is the founder and president of Azure Pools & Outdoor Living, Inc. He came to the United States in 1990 seeking a better future for himself and his wife and shortly after started his own business. He has extensive experience in residential and commercial construction of in-ground swimming pools and outdoor features. After 26 years, Jaime’s business has served hundreds of homes and businesses in the Dallas-Fort Worth metroplex and surrounding areas. Jaime is married to Dejani and they have three boys. Above all, Jaime is a God-fearing man and with his family, they attend First Assembly of God Church at Firewheel in Texas.

Is a native of Uganda currently residing in Dallas, Texas. He serves as the senior executive coordinator of Heavenly Bridge Ministries in the USA. He has led numerous short-term mission teams to Uganda over the years; and has seen many come to Christ, and hundreds of orphans being helped through these mission trips. He has also led short-term Medical Missions, out of which a modern medical center is being established in Uganda. In 2015, God led Pastor Moses to plant a Church in North Texas, called Heavenly Bridge Church, where he currently serves as the lead Pastor. He is also the founder and chairperson of “Just for You and Me” Marriage Seminars based in Dallas, Texas. Pastor Moses enjoys seeing people live to their higher calling. He is happily married to Margaret Akitwine and together they have three children, one boy, and two girls.

Is a retired Judge on the Texas 12th Court of Appeals. He has instructed law at Tyler Junior College, Texas; Koya University, Iraq, and Yunnan University School of Law, China. As a civic effort, he helped create a food production ministry, grew and delivered over 230,000 pounds of vegetables in five years (2010-2015) to the East Texas Food Bank. He has tremendous farming knowledge and he is passionate about training farmers to adopt better farming techniques. He attends Green Acres Baptist Church in Tyler, Texas. Texas. 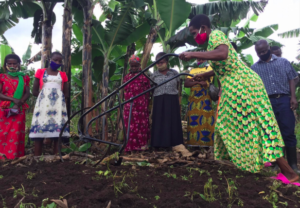